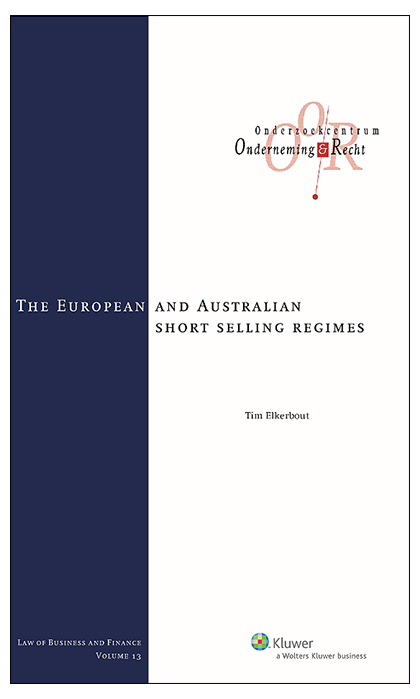 Ever since the start of this regulatory reform, there has been a lot of debate as to whether the new rules will indeed protect the financial markets against new crises, and whether the rules are economically justifiable. A field of law in which this debate has continued is the law with regard to short selling. The discussion on how best to regulate short selling symbolizes the broader debate on the regulation of financial markets, since short selling laws are a mix of both strong moral and strong economic views, as is the case with other financial laws, although in a less intense way.

This book aims to contribute to that discussion. In order to provide valuable input to address the question on how best to regulate short selling, the new European regulatory framework, which is reflected in the European Short Selling Regulation, is compared with the revised short selling laws that apply in Australia. As Australia is especially a jurisdiction that was hit less hard by the global financial crisis, its short selling laws provide for an interesting legal comparison.

Consequently, the book reflects the results of a comparison of the revised laws on short selling in both the European Union and Australia. It provides a systemic overview of both laws, discussing their background, object and substance extensively. In particular, it focuses on the practical consequences of the laws for the financial markets. The systematic approach allows the reader to fully understand the dynamics of these complex sets of rules.

The series aims business law and financial law topics in an international and comparative perspective. This series has been published by the Business and Law Research Centre since 1999.